Guest Post By: Peggy Wang
I was 13 years old visiting the Smithsonian Museum of Natural History when I fell in love. “Africa: The Serengeti” (released in 1994) was being featured at the museum. I was immediately mesmerized by the gorgeous aerial views of the endless plains, the interactions of the African wildlife, and of course, learning about the greatest migration of land animals in the world. Making it to the Serengeti became a dream for me right then.

Nearly two decades later, I convinced my husband to make Tanzania our next travel destination. There are so many things to do and places to see in Tanzania–climb Kilimanjaro or Mt. Meru, go on a safari, relax on Zanzibar—-but with limited vacation days we had to stick to our (my) priorities. And making my way to the Serengeti was at the top of the list!

I contacted several safari operators that conduct tours in Tanzania for quotes based off my desired itinerary. We ended up selecting Good Earth Tours. They were neither the cheapest nor the most expensive, but they were responsive and seemed to really take into consideration what we were and were NOT interested in. With their guidance we developed my safari circuit tour itinerary, which included:

Tarangire National Park
What a gem! I had been so absorbed with seeing the Serengeti that I totally overlooked Tarangire National Park. We had the opportunity to see an ABUNDANCE of elephants up close, as well as various species of antelope, warthogs, zebra, ostrich… the list goes on. And the scenery is indeed something to marvel: diverse and intoxicatingly beautiful at the same time. For anyone wanting to keep their safari duration short and stick close to Arusha (near the airports), Tarangire is a must! There is only one water source in Tarangire National Park, so in the dry season, you have the opportunity to witness all the animals converge around the river.

We stayed at the Tarangire Safari Lodge in semi-permanent tents. The lodge overlooks a stunning view of the park—calm and elegant during sunset. The lack of barriers between the lodge and the park means the view is unobstructed; allowing you to witness animals like warthogs and gazelle foraging. Sometimes they will even wander onto the property. Falling asleep to the sounds of wildlife snorting in such close proximity is an entirely different and surprisingly soothing experience. 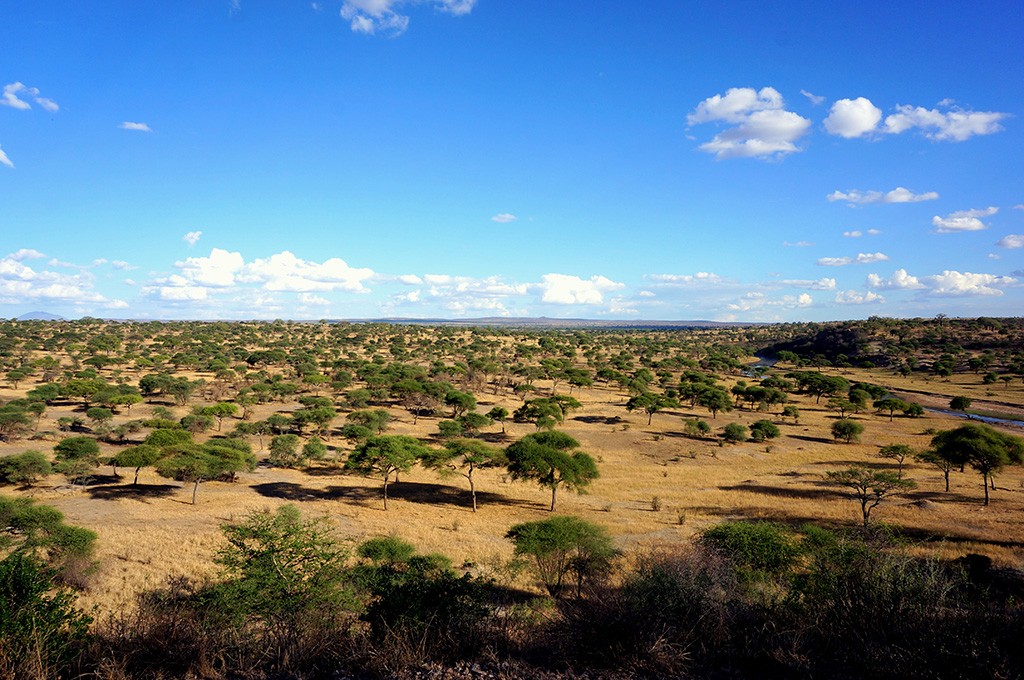 Ngorongoro Crater
Ngorongoro Crater is a UNESCO World Heritage Site for a reason. This volcanic crater has become its own unique eco-system with water sources, plant life, and wildlife taking up residence year round. The views are absolutely breathtaking. Sadly, when we visited, there were less than 10 black rhinos living in the crater so sightings were rare. In fact, we did not get to see any at all. But that was a minor loss compared to what we did get to see. We were able to witness a lion and lioness mating, a male warthog successfully battle 2 hyenas, an abundance of hippos and flamingos, and just about the most splendid views of nature one could ask for. To top of this experience, we took a steep and bumpy ride down into the crater–highly recommended!

We stayed at the Ngorongoro Wildlife Lodge. It is well-located with 1) a viewing balcony in the common area (you won’t be able to see anything once its dark though), 2) passable food (nothing gourmet but it’ll do), and 3) standard bedding and bathroom facilities (calling the beds a “comfortable” would be very misleading and whether you get hot water in the shower is questionable). Nothing to rave about but what you do get are UNBELIEVABLE views of the crater from the bedrooms. 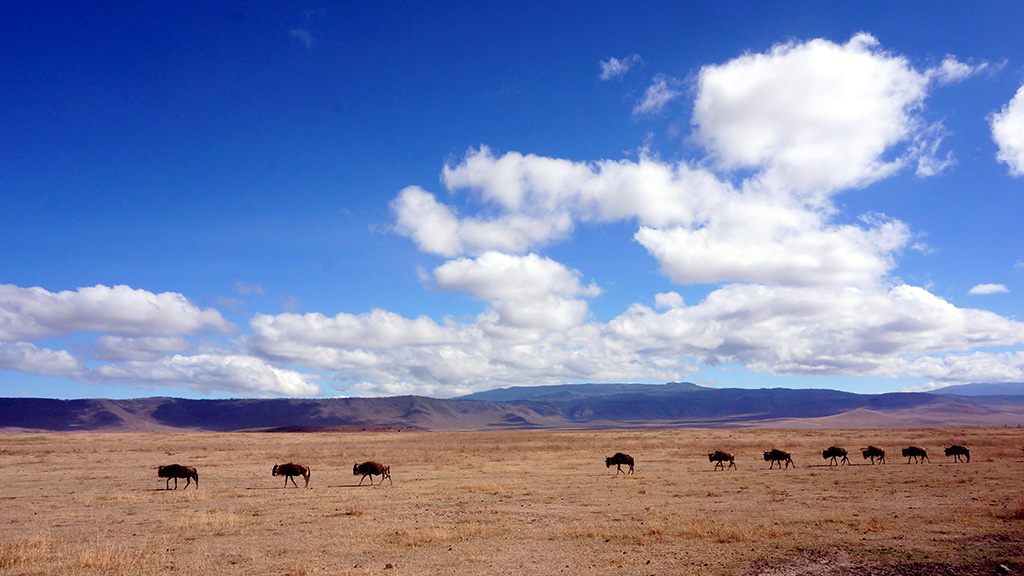 Serengeti National Park
The moment I had been waiting for since I was 13!!! And it did not disappoint!  The scenery en route to Serengeti was staggering as the mountainous region of the Ngorongoro Conservation Area gave way to flat plains that seemed to stretch forever. We even encountered giraffe on the way! Upon arriving to where the paved roads ended, we were introduced to what our driver called the “Tanzania Massage”: the bumpy dirt paths of the Serengeti area. He was right. It was several days of a continuous “massage”.

The Serengeti is immensely larger than the parks we had visited on previous days. At times, it felt like the wildlife was not as dense. However, there were definitely plenty of animal sightings. We witnessed a lion having his water buffalo breakfast while his three lionesses lounged on a nearby rock formation. We watched in panic as a hyena galloped closer and closer to us as we were just settling in to eat our breakfast outside the vehicle. We observed a leopard lounging in a tree to shade itself from the noon day sun when some young baboons decided to come around and bully and harass it. We glimpsed cheetahs on the run. And beyond all the incredible wildlife, the sunrises were something else—I gladly woke up before the crack of dawn to experience it (and I am NOT a morning person). Childhood dream fulfilled!

We stayed at the Seronera Wildlife Lodge, which is cleverly built into a kopje (protruding rock formation). It has a viewing deck and a pool—but be aware, baboons and resident rock hyraxes drink from it, so think it over before you jump in. Food was passable but could be a lot better. Rooms were basic, similar to Ngorongoro Wildlife Lodge although the beds here were slightlybetter. 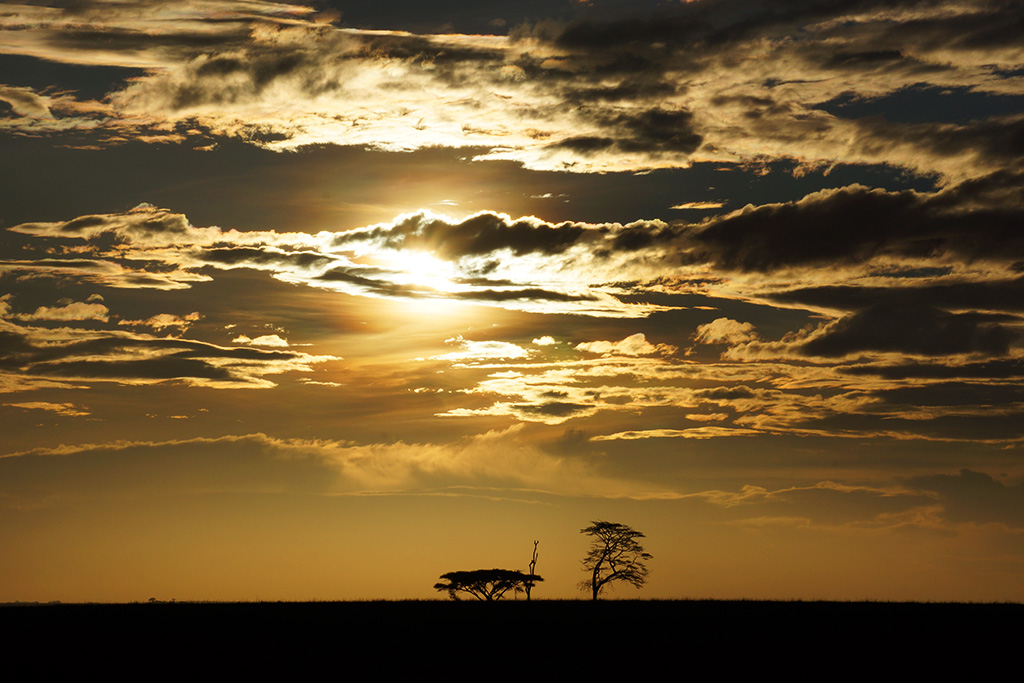 Ndutu
When the wildebeest and zebra of the great migration make their way back from the Maasai Mara in Kenya, many will end up at the Ndutu area to give birth. We had arrived during the shoulder season in early December. If the rains had come early we likely would have seen the herds around the area already. However, when we went, the rains were late and the Ndutu area was still dry and dead. Dry as in Lake Ndutu was completely dried up and we could walk and drive around the bottom of the lake. And it was about as dead as the brown vegetation and skeleton of the hippo we came across. There wasn’t much life other than a few dik-diks, gazelle and birds, but it was a risk we knowingly took—nature is hard to predict, and this time the weather did not work in our favor.

However, we stayed at the Ndutu Lodge, which was quite comfortable. Each room was its own bungalow with a porch. Comfortably furnished inside and relaxing to sit outside. The food was delicious. Dik-diks roamed around the property—they look like deer with big wide eyes, but they are the size of a cat. My driver apologized for the lack of views but I disagree—it had some beautiful starry nights—nothing bright enough for us to photograph but completely worth sitting outside to appreciate. We used our stay here to relax on the property and feed some rainbow colored birds—I expect this area to be truly incredible when the rains come (which will also be when this particular lodge is very difficult to book). 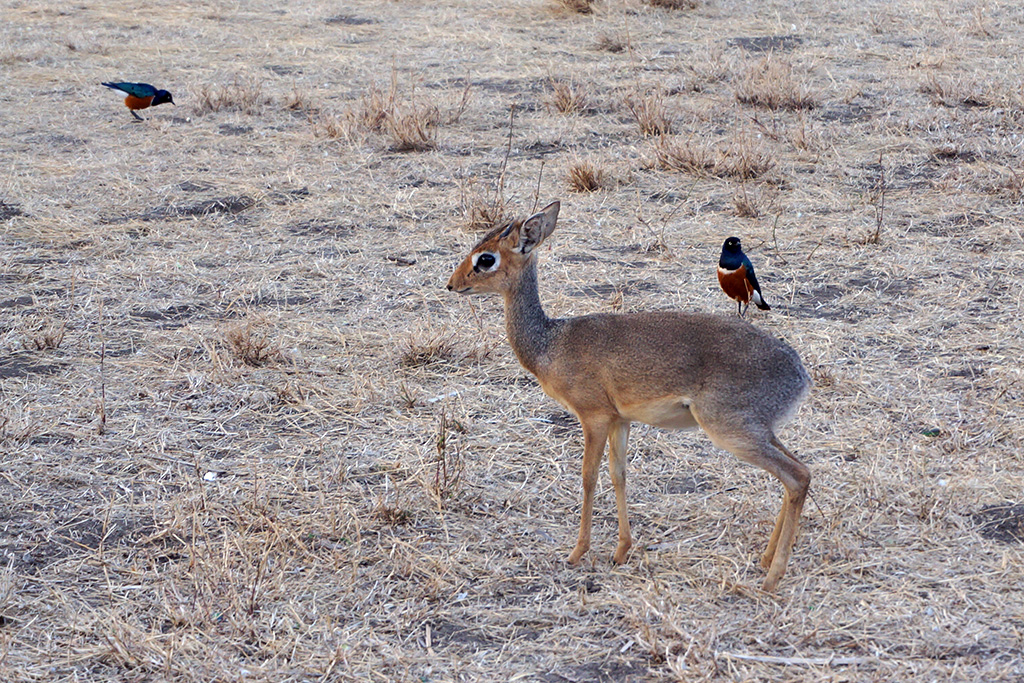 Lake Manyara National Park
Lake Manyara is a small park—it can be done in a half day drive. While the landscape at Tarangire was hilly and pretty diverse, Ngorongoro a flat crater bed, and Serengeti a vast expanse of flat plains with few trees, Lake Manyara is greener and forested, even in the dry season. However, because the lake is much smaller and the water further away from the vehicle roads during the dry season, animals were generally much harder to see when we went. Plenty of monkeys though. This park was less impressive than the others, but then again, we started off with Tarangire, Ngorongoro and the Serengeti! It’s tough to top any of those.

We stayed at Lake Manyara Hotel—a beautiful property where rooms are a comfortable size and have balconies, and the lawns and landscaping on the property is well-cared for and lush. It has a small gazebo with a view of Lake Manyara in the distance. Food was good here. What’s not to love? Well… the BIG drawback of this lodge is the actual design of the room’s ventilation. While none of the places we stayed previously had air conditioning—we were completely fine with them. BUT the room here seemed to be designed with aesthetics in mind and very little consideration for proper airflow and ventilation in hot weather. My husband and I are both engineers—we couldn’t help but sit down and analyze this out! 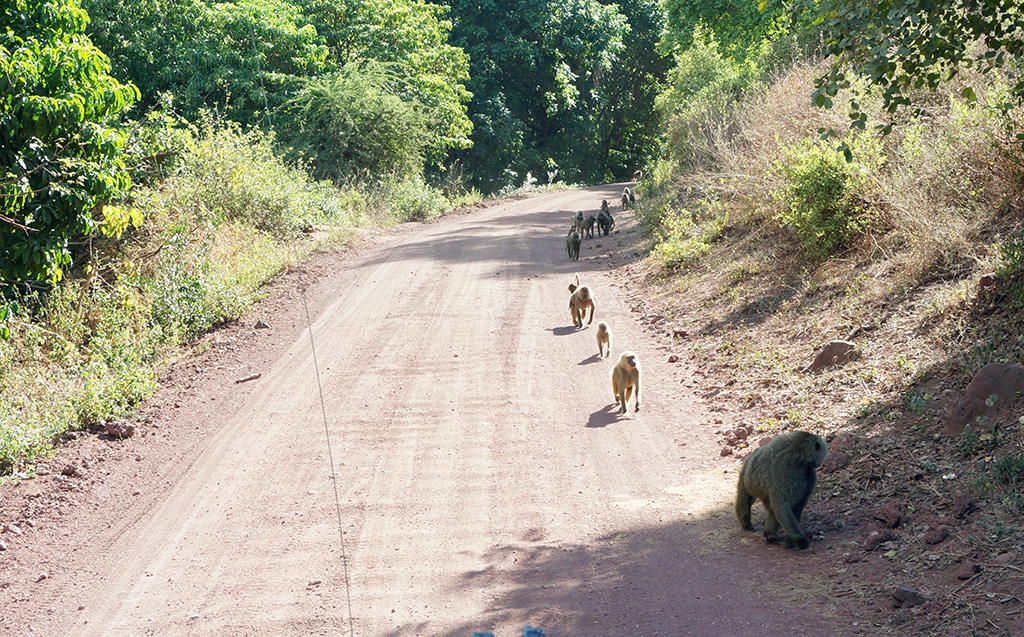 Disconnected Travel. The Art of Being Present.