The Turkey Edition: 6 Best Places to Visit in Turkey 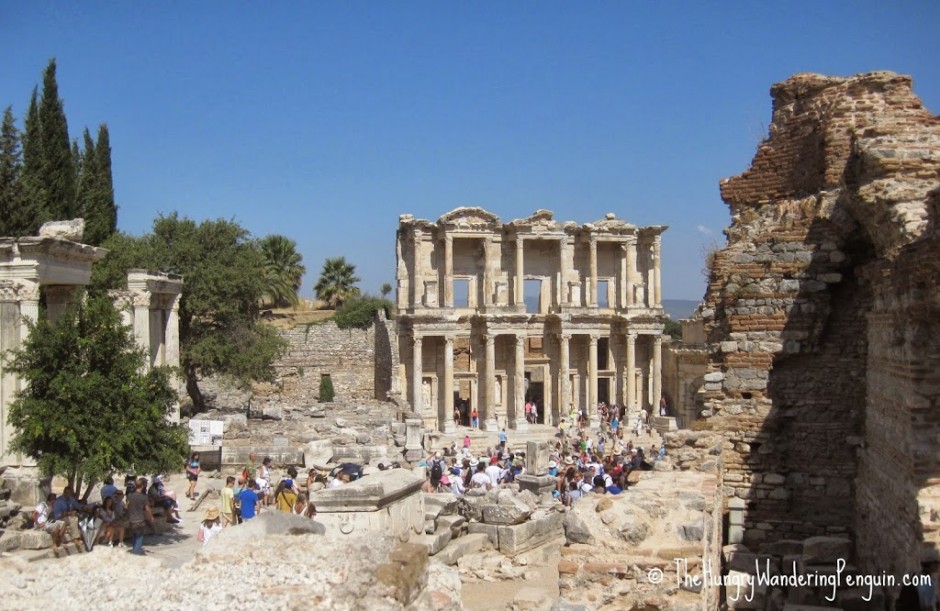 Oh Turkey! How I Love Thee… Let Me Count the Ways!

Turkey wasn’t always one of my favorite countries. In fact, it never really crossed my mind as a “must-visit” destination. It was a one-off country that seemed cool, but didn’t stick out. Probably because I knew little about it. However, my perspective changed during my two weeks there. I discovered the underwater treasures below the Mediterranean Sea, was mesmerized by the gleaming white thermal pools in Pamukkale, and marveled at the dramatic Cappadocia landscape as I floated from high above in a hot air balloon. Turkey is indeed a hidden gem. What makes Turkey so amazing? I could go on and on and on. But let’s start with just the top 6 reasons:

1. The Gleaming Travertines of Pamukkale 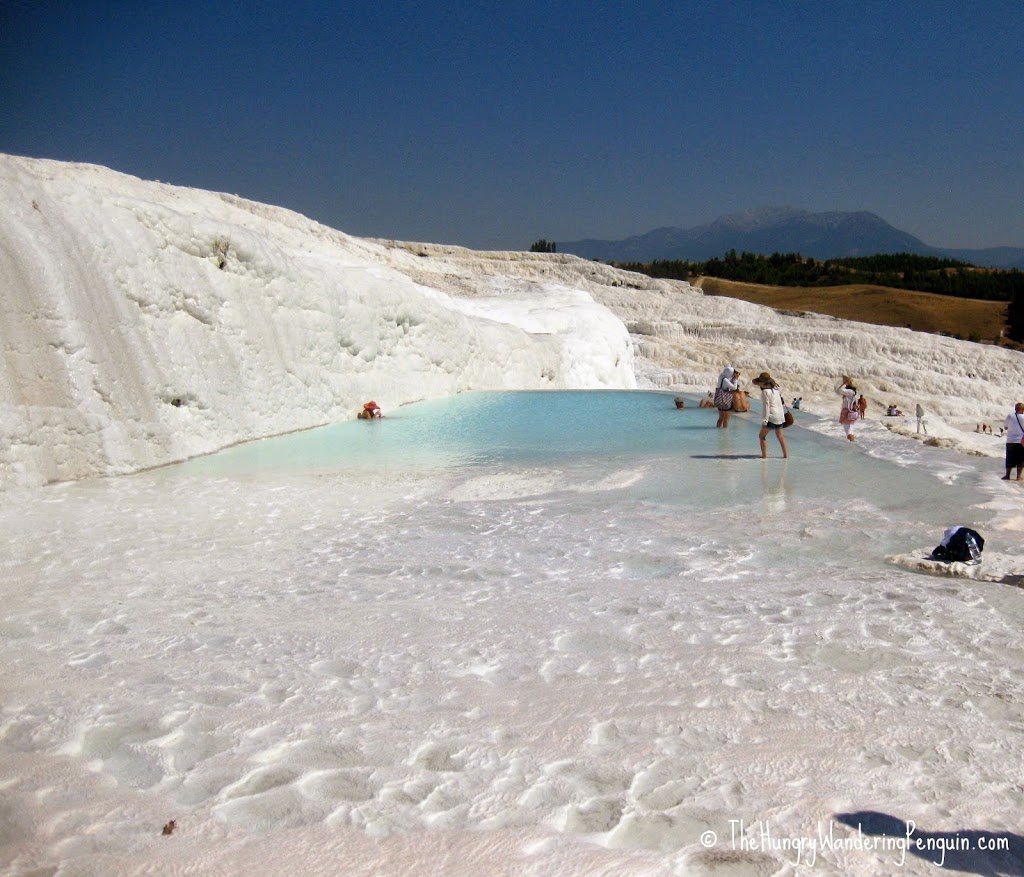 Pamukkale, meaning “cotton castle” in Turkish, is an absolute MUST SEE. The natural beauty of the travertines were formed over hundreds of years as the calcium-laden thermal waters cascaded down the mountain and hardened to create the glistening white calcium pools that you see today.

MUST DO: Swim in the Thermal Pool
The hot spring water is said to have health benefits for circulation and the digestive system. In fact, the Romans built the spa city of Hierapolis around a sacred thermal spring–the Sacred Pool. If you fancy a swim to feel like the Romans did, you can pay to swim in it. When you tire of lazying around, you can meander through the marble columns from the Temple of Apollo or explore the great Roman amphitheater of Hierapolis. Pamukkale is a mix of beautiful landscape, hot thermal baths, and rich history. What more could you ask for? 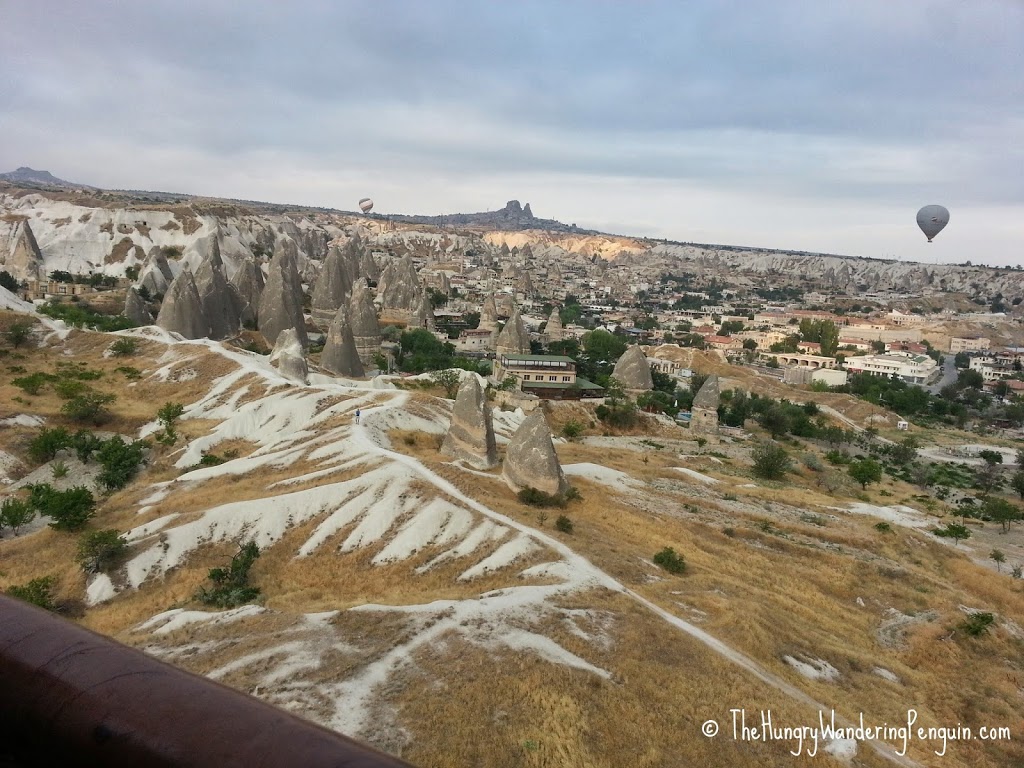 Cappadocia is surreal. The volcanic craters, desolate plateaus, and mushroom-shaped rock formations jutting from the ground makes this city a rocky wonderland. The intricate landscape is dotted with houses and churches burrowed into the stone cliffs. And the underground cities built centuries ago for Christians fleeing Roman persecution can still be visited today.

MUST DO: Take a Hot Air Balloon Ride Over Cappadocia
A favorite activity in Cappadocia is taking a hot air balloon ride over the fairy tale landscape as the sun slowly rises to light up the city. If hot air balloons aren’t for you, Cappadocia offers plenty of other options. Adventure seekers can explore the vast number of hiking trails or see the city from aboard an ATV. History buffs will thrive on the stories past as they traverse the underground cities and multitude of museums. You can also take a pottery-making or carpet-making class. Or just relax in your cave hotel. I did mention that the majority of hotels are built into caves right?

3. The Mellow Town of Kas 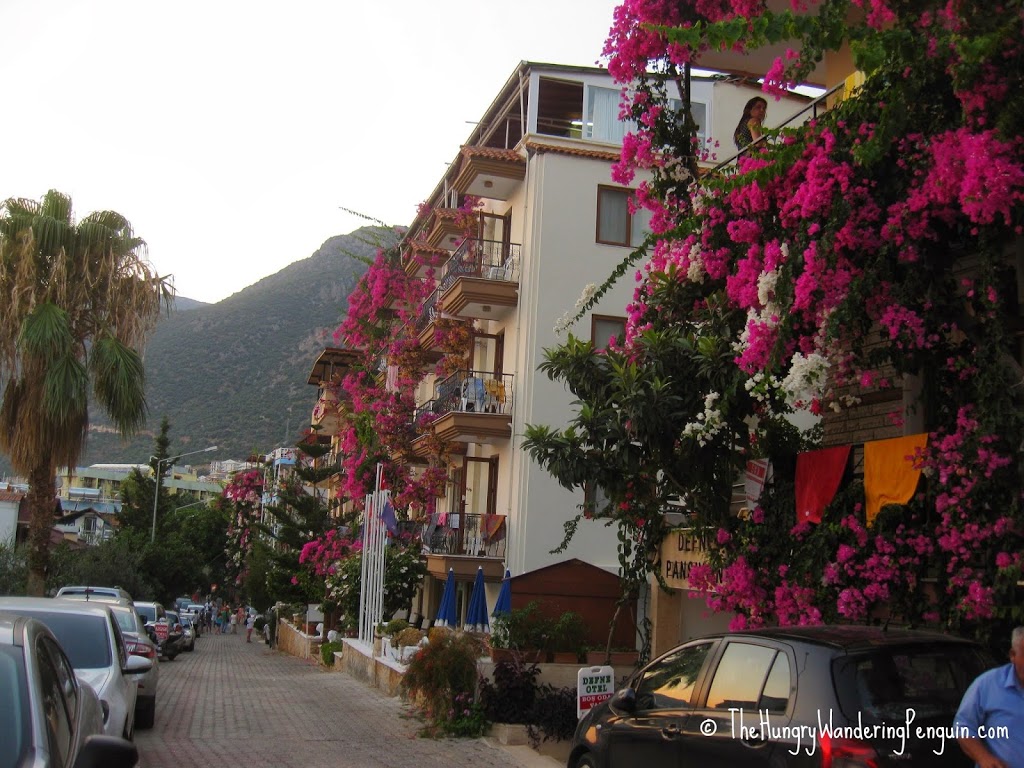 The small coastal town of Kas does not boast the best of beaches–they are small and pebbly. What is lacking in nice beaches, is made up for by the deep blue coastal sea, the narrow streets lined with a colorful array of flowers, and the plethora of adventure sports. In particular, Kas is a leading scuba diving destination in Turkey. Visitors can also trek the Lycian Way, go mountain bike, or make a day trip to Megisti, the Greek Island lying just across the water.

MUST DO: Sail in the Mediterranean Sea to Kekova
Don’t miss the opportunity to sail around the Sunken City Ruins of Simena (aka Kekova). After all, who wouldn’t want to cruise around the Turkish islands and dive into the Mediterranean Sea for a quick swim? And after a long day exploring, Kas will welcome you back to comfortable guest houses, home style cooking, and open air bars where you can relax and chat with other travelers about your days adventure. Sounds pretty amazing right? I couldn’t agree more! 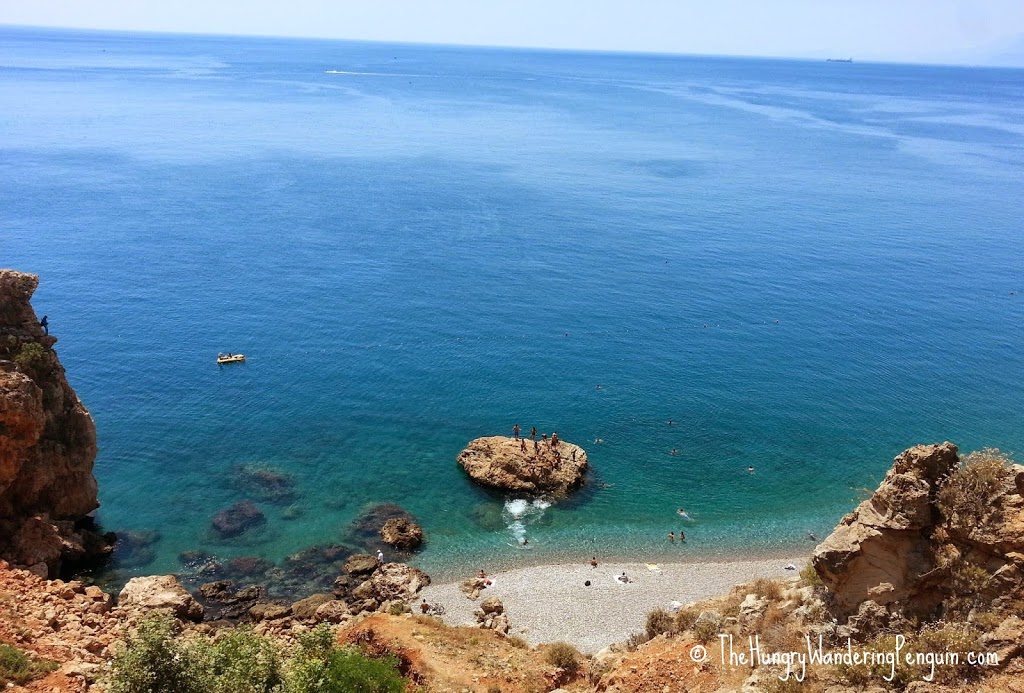 Both beautifully modern and classical, this large vibrant city perched on the Gulf of Antalya is a leading tourist destination. The city is adorned with beaches boasting sparkling deep blue waters and surrounded by tree-lined mountain ranges.

MUST DO: Get Lost in Antalya’s Historic Sites
Explore Kalceici, the old town of Antalya, which still retains much of its original ancient Ottoman architecture. Then visit the ruins of Termessos and the Antalya Archaeological Museum. Tired of all the historical sites? Go take a dip in the sparkling blue Mediterranean Sea or mountain climb along the lush cliffs. For the more cultured, visit Aspendos for the Ballet and Opera Festival. Antalya also offers a number of exceptional bars and clubs–many of which have live performances.

5. The Ruins of Ephesus 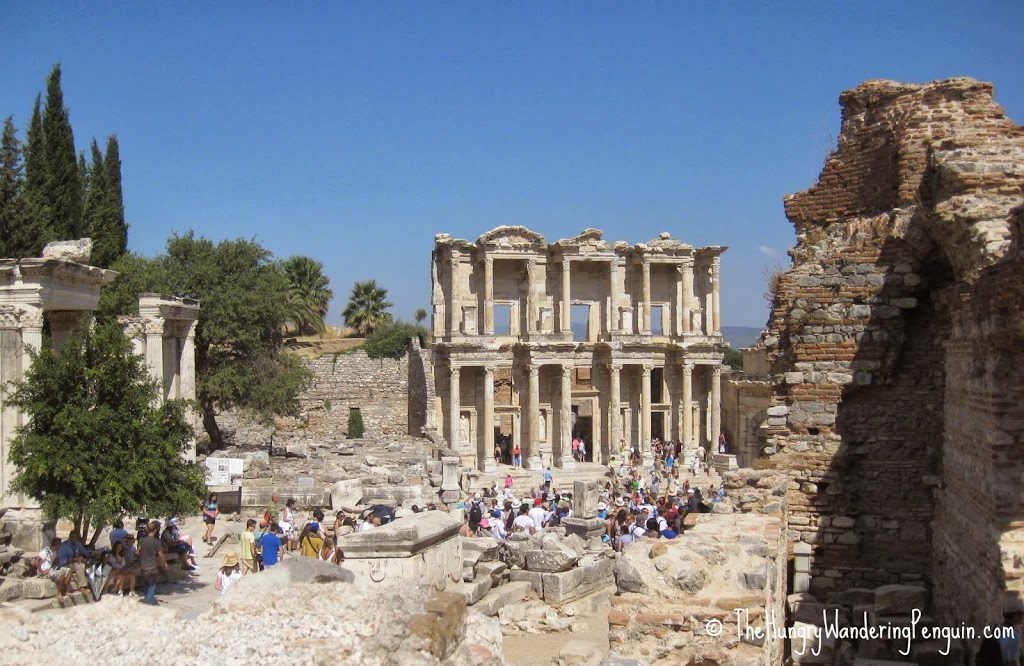 Ephesus is home to one of the Seven Wonders of the Ancient World–the Temple of Artemis. Although only about 15% of the site has been unearthed, Ephesus has the largest collection of Roman ruins in the eastern Mediterranean. The magnificence of this well-preserved ancient city lends to why it is one of the most popular tourist attractions in Turkey.

MUST DO: Meander Through the Roman Columns
Imagine the Roman Empire that once inhabited this land as you get lost among the impressive structures that loom above you. Explore the Odeon, the Library of Celsus, and the Great Theatre. Expect to spend a few hours exploring before you head out to a nearby restaurant to try Gozleme, a traditional crepe-like Turkish meal.

6. Istanbul: A Blend of History & Modernism 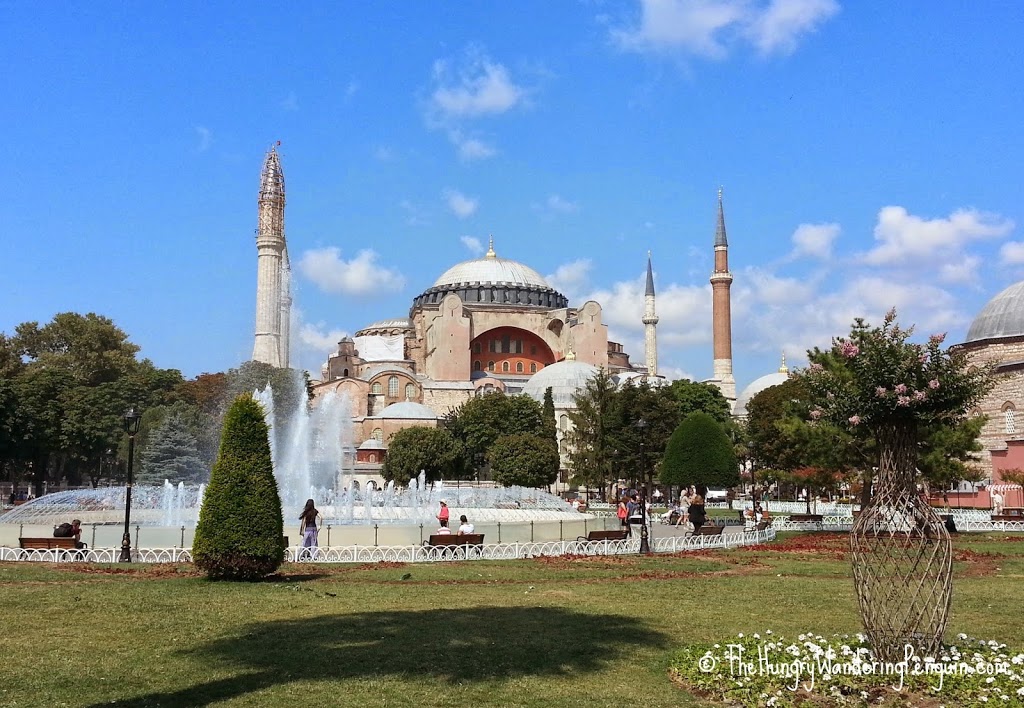 Formerly the capital of the Ottoman Empire, Istanbul is one of the largest cities in the world. As with most cities in Turkey, Istanbul is a striking blend of old town ambiance and exotic modern flair. The city offers a myriad of things to do from visiting historical sites like Ayasofya and the Blue Mosque, to wandering through vibrant neighborhoods like Taksim Square. There is also a fantastic nightlife with bars and clubs that I hear are frequented by celebrities. So who knows, you might have a celebrity sighting here! From the fantastic array of delicious Turkish specialties, to the Hamams (Turkish Baths), and Whirling Dervish shows, Istanbul has it all.

MUST DO: Cruise Along the Bosphorus Strait
Though often overlooked by many tourists, cruising along the winding Bosphorus Strait is one thing you should definitely make time for. The Strait separates Europe and Asia, making Istanbul the only city that spans two continents. As you cruise along, you can admire the magnificent panoramic view of both continents from the comfort of your boat. Pretty cool huh?

Your Guide to the Best Food and Drink of Hamburg

Breakfast at Mama’s on Washington Square – Is It Overhyped?