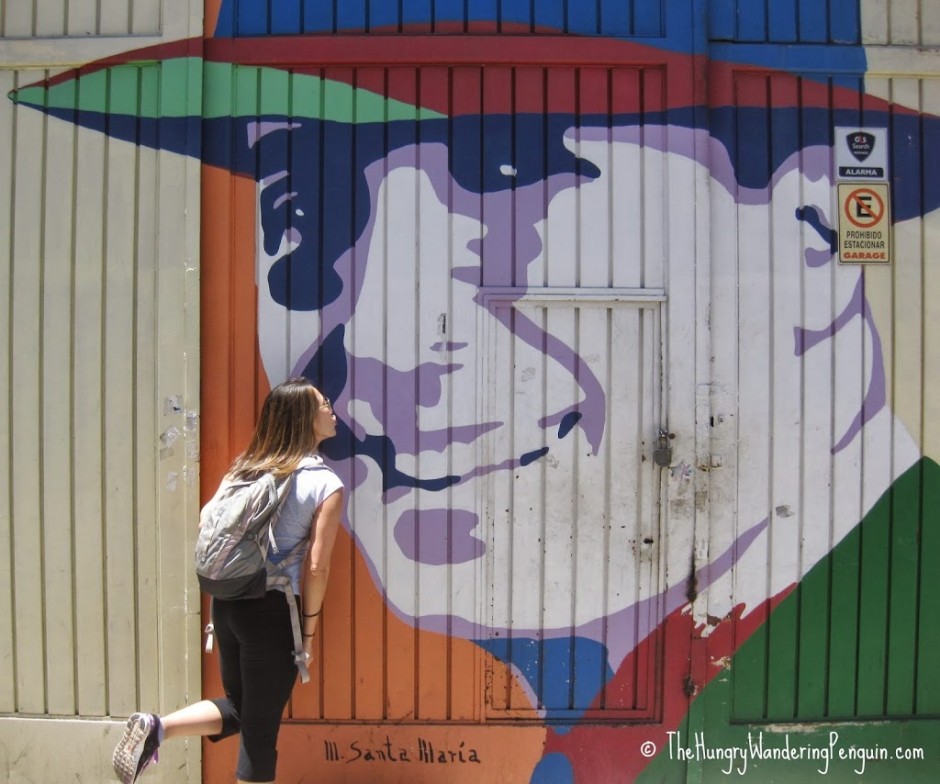 Argentina is a pretty large country–the eighth largest in the world to be exact! Needless to say, the diverse range of geographies and activities means Argentina has something to offer to everyone; from the foodies to the adventurers, or the sports fanatics to the party animals. That being said, having just returned from 12 days in Argentina I obviously have a lot to share! So I thought I’d kick off my Argentina-series of posts with a “Top 10 Must-Do’s” in Buenos Aires. 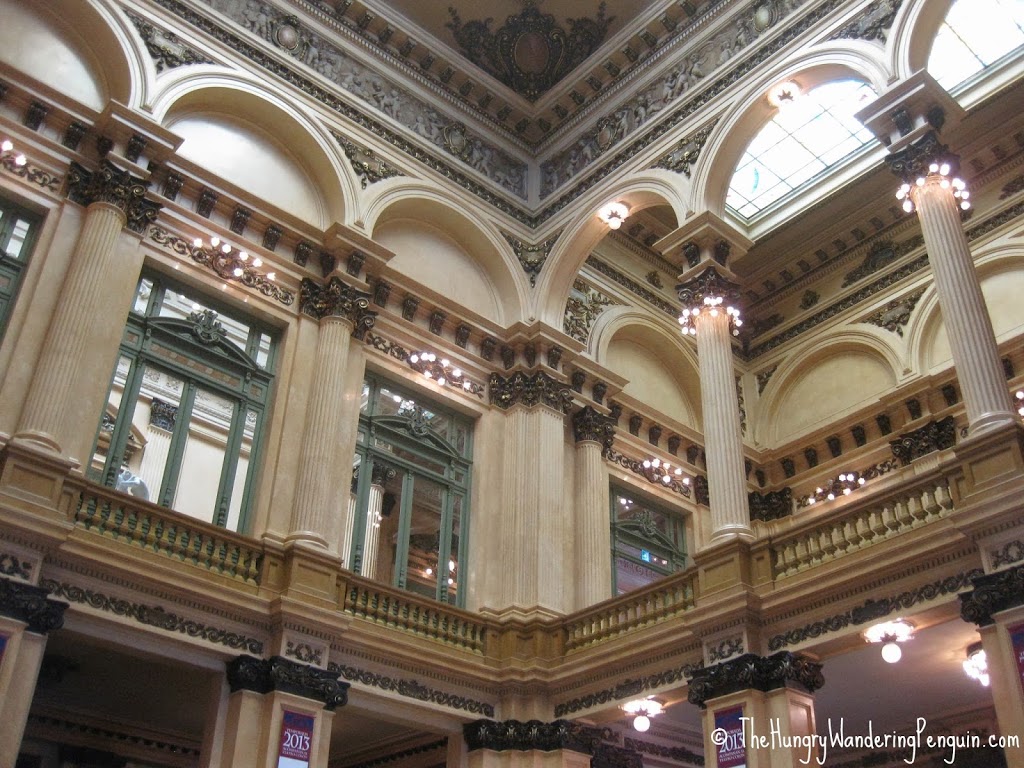 10: Tour the Teatro Colón
The Teatro Colón is among the best operas in the world. It has history and is an icon of Buenos Aires. Though I wasn’t able to see an actual show, I took a 50-minute guided tour. The architecture is elegant with all the little intricacies and details in its design.
During your visit, you also get to witness the magnificence of the theater and visit the boxes where the VIPs usually sit–seats that I certainly couldn’t afford during a show! 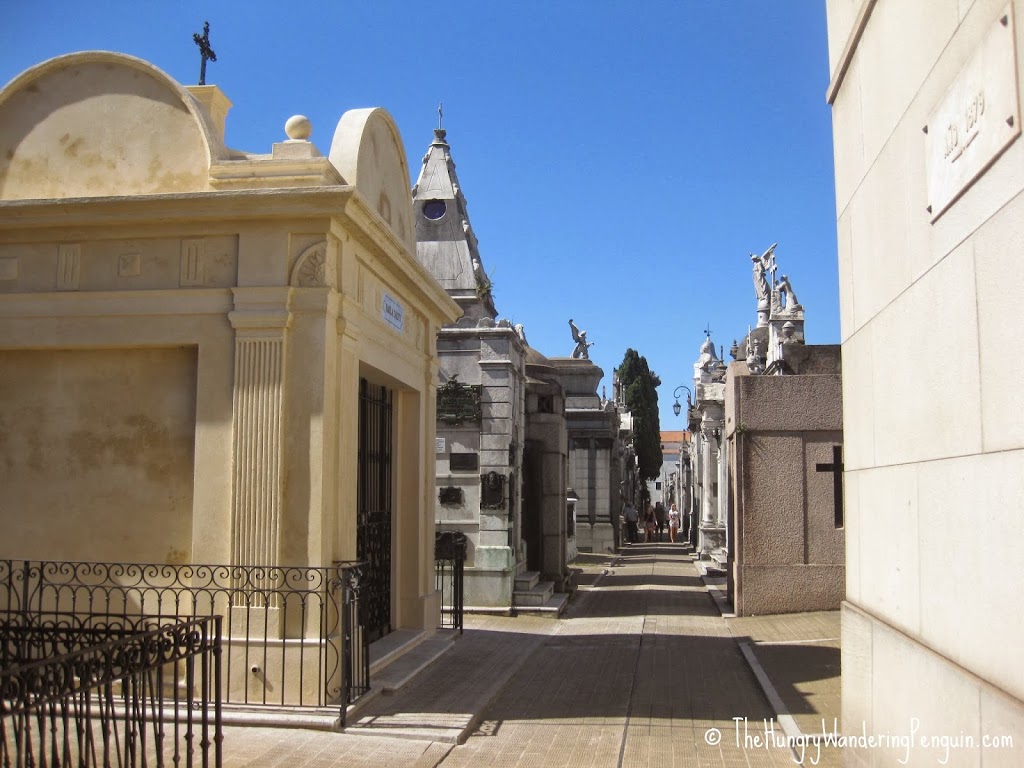 Famous as the necropolis where Evita’s tomb lies, this site is a labyrinth of passageways lined with intricate marble mausoleums, intriguing neo-Gothic statues, and plenty of stray cats. Though some recommend spending a few hours here, 30-minutes was sufficient for me. After all–at the end of the day, it is a cemetery. Bonus: free admission! 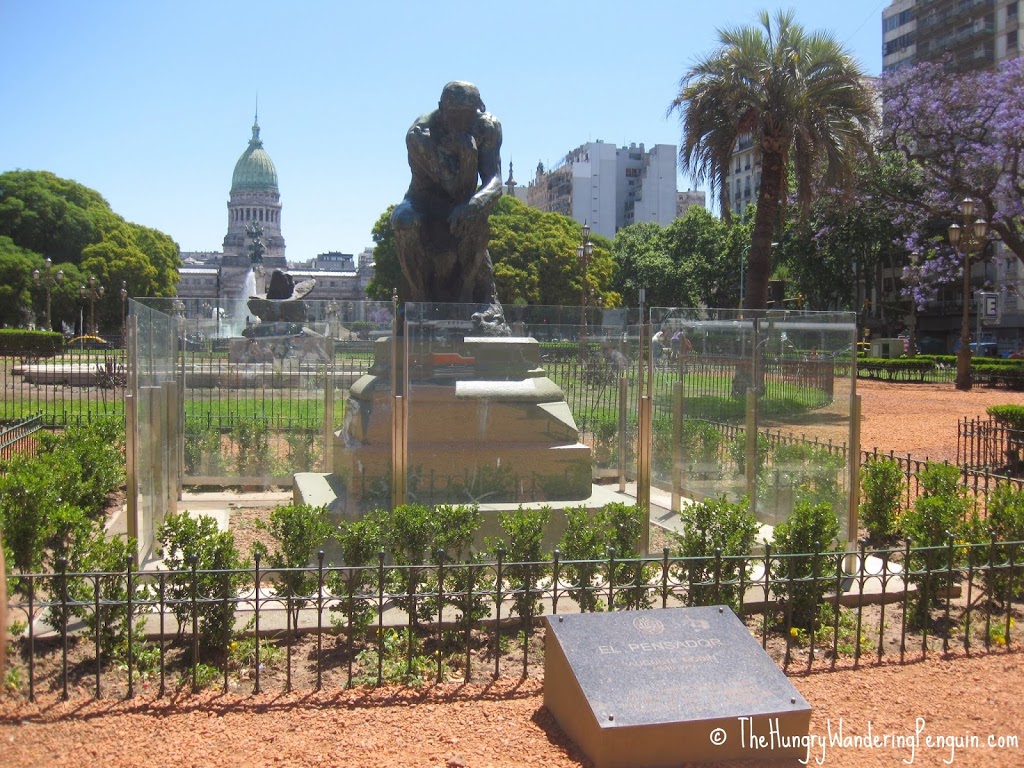 One of the largest public squares in Buenos Aires, this plaza is where you can find 1) the Palacio del Congreso, Argentina’s national House of Congress which was modeled after the Capitol in Washington, D.C., 2) the third of eight original casts of The Thinker, and 3) dog walkers taking a break and letting their pets frolick in the many fountains that line the plaza. If you want some down time, this is a great spot to relax under a tree, enjoy the scenery, and people watch. 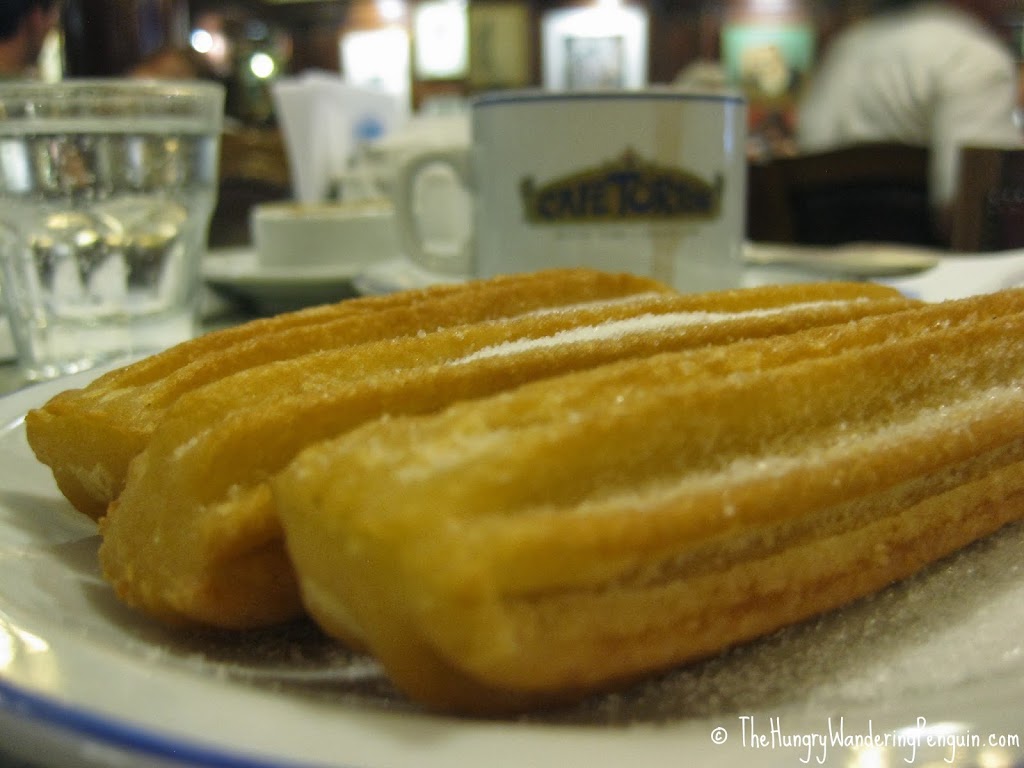 7: Take a Break at Cafe Tortoni
The oldest cafe in the country, Cafe Tortoni boasts a charming atmosphere. With its stained glass skylight, beautiful wood pillars, and waiters adorned in traditional attire, it is no wonder how this venue has been awarded multiple times as one of the most beautiful cafes of the world. Expect to wait in a queue outside of the restaurant and don’t expect fast service. Come here to take a break from your day, step into history and appreciate the architecture while enjoying a decadent churros con chocolate (hot chocolate and churros). The churros come out crispy and warm and pair amazingly with the hot chocolate!

6. Dance the Night Away… and Then Keep Dancing After That! 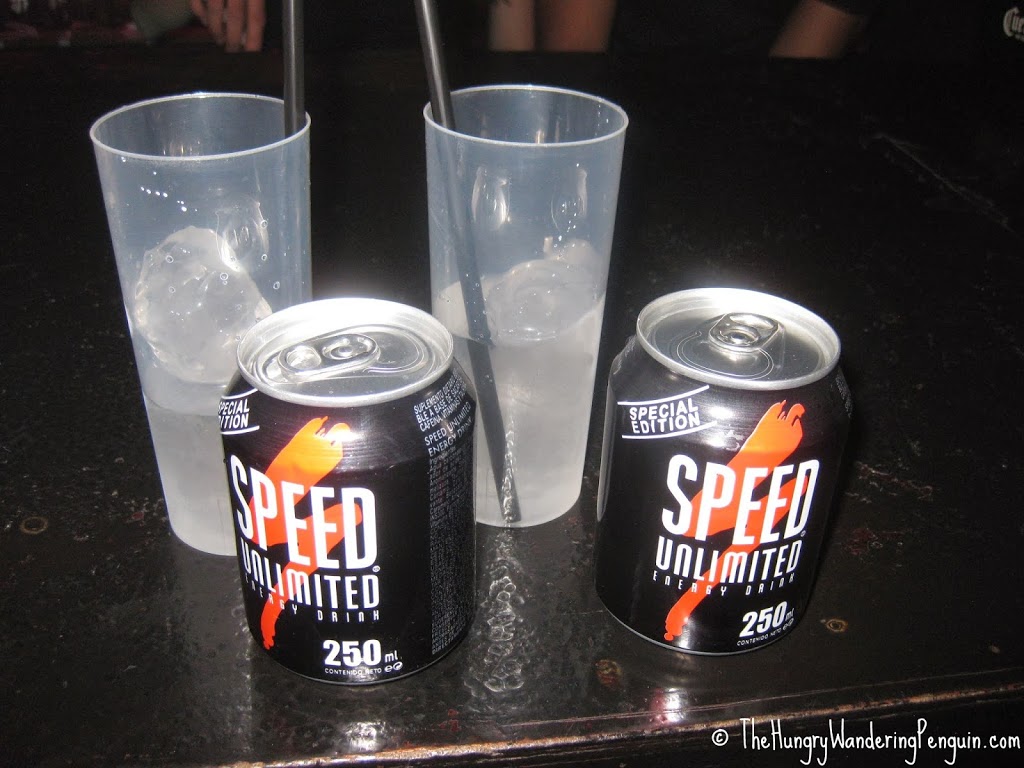 Partying in Buenos Aires takes things to a whole new level and is a test for even the professional party people. The night doesn’t begin until 2am and when the sun rises it’ll be time for the after-hour parties! You’ll be thankful for the Vodka Speeds–they’ll help to keep you going! What are the hot spots? In a city like Buenos Aires, what is hot is constantly changing so ask around for recommendations when you get there. 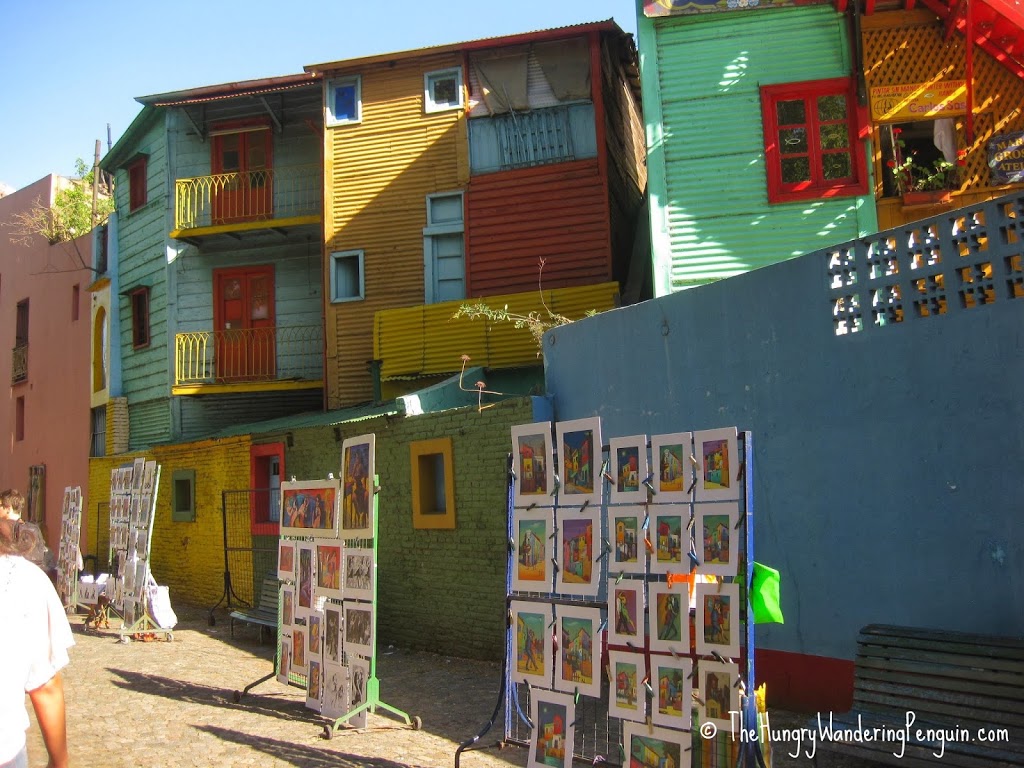 5. Admire the Artistic Beauty That Fills the City
El Caminito in La Boca is well-known for its brightly painted houses and local artists selling their work. But the artistic beauty that lines the streets of Buenos Aires does not end there. The city is filled with intriguing street art and architectural pieces that will continue to impress as you explore every nook and cranny of the city. I was in constant awe as I wandered and encountered all of this.

4. Wander the Outdoor Markets in Search of Trinkets 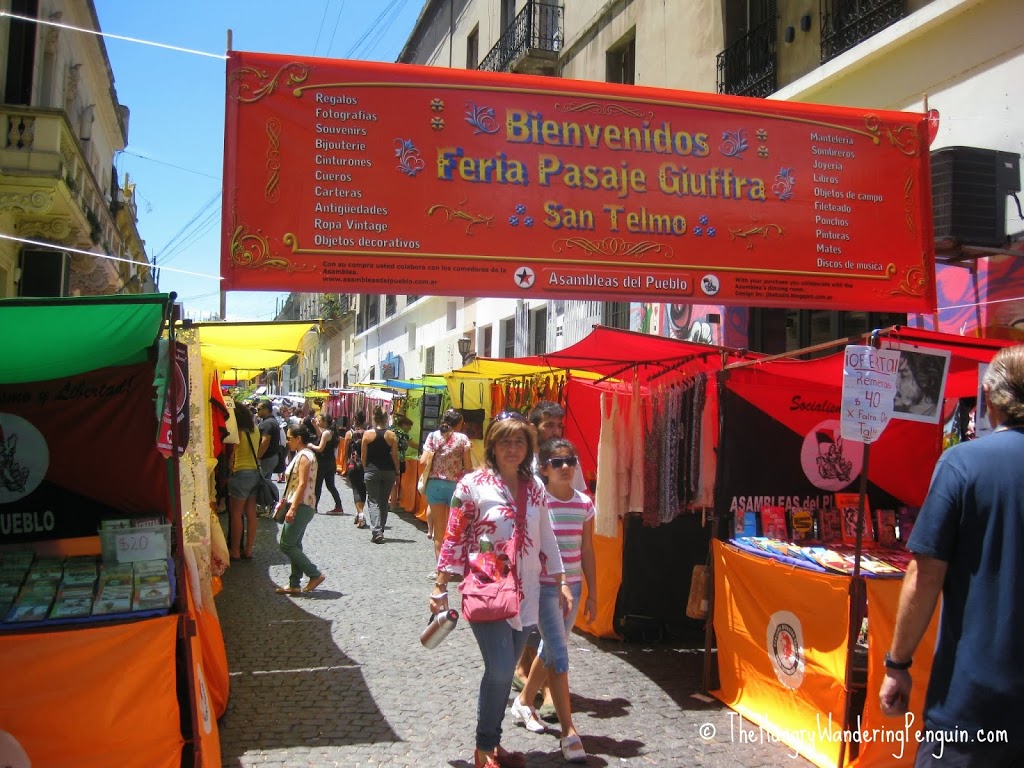 Filled with trinkets galore, the outdoor markets become any Treasure Hunter’s playground. Fancy an antique phone? Or perhaps handmade leather purses? Maybe you just want a few magnets to bring home. There’s something for everyone at these vast markets. And when you need a break, grab a fresh-squeezed orange juice from the juice stall and watch the musical performances as they energize the crowd that has circled around them.


You might even come across a Carlos Gardel impersonator performing in the streets like I did at the Sunday Fair in San Telmo. Speaking of Carlos Gardel… 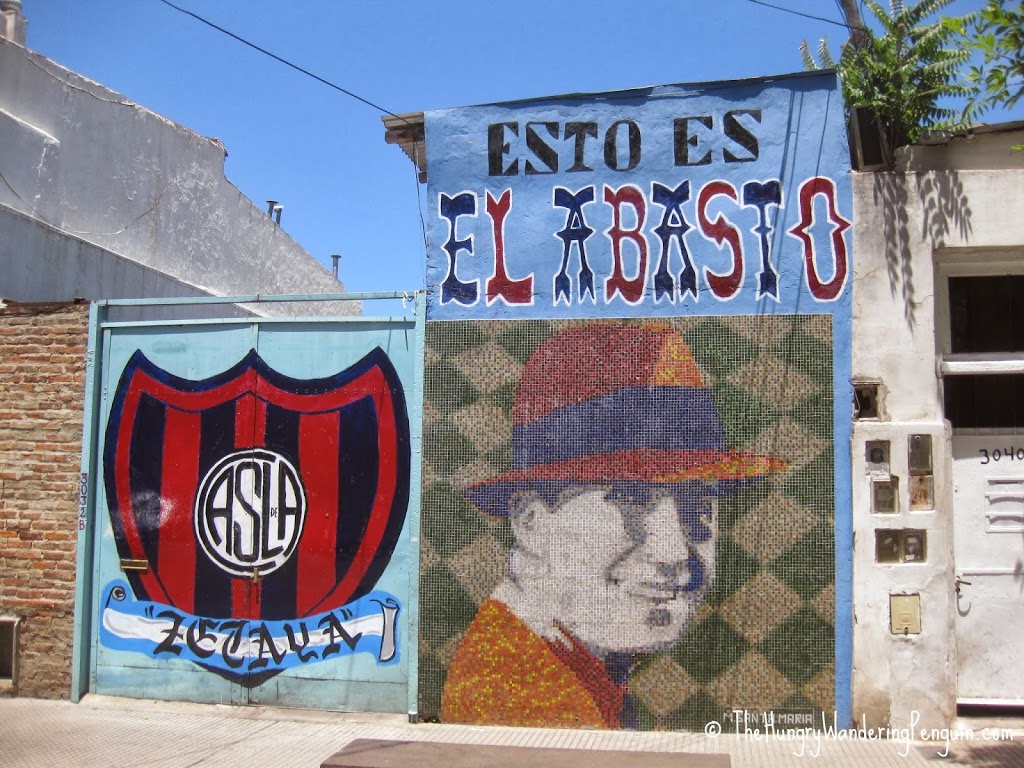 Carlos Gardel is known as the “father” of tango. The equivalent of Elvis to rock ‘n’ roll, if you will. You’ll see his face everywhere. There’s even a subway station named after Mr. Gardel! Tango used to be purely instrumental music and dance used as entertainment for men looking for work during the Great Depression. Carlos Gardel’s revolutionized the art by adding lyrics (and his charmingly good looks) to move tango from the underground salons to becoming popular among the upper classes.
There are many ways to experience Tango in Buenos Aires whether you want to see a show, take a lesson, or show off your dance moves at a local Milonga (tango dance hall). If you really get into Tango, there are also plenty of shops to buy your very own tango shoes and costume! 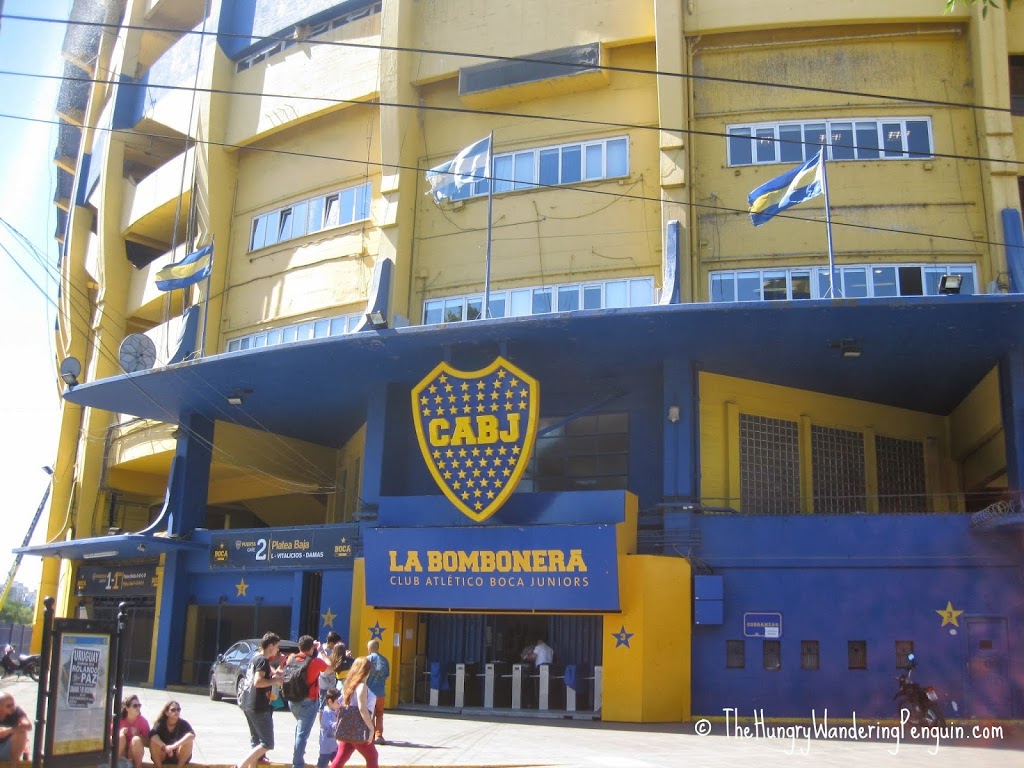 2. Engage in the Fútbol Frenzy
When in Argentina, or anywhere in South America for that matter, Fútbol is a must! Fútbol in Argentina is a way of life. The sheer energy and pride in the teams is nothing I have ever experienced. If you’re lucky enough to be in town when the Boca Jrs. are playing at La Bombonera stadium I’d highly recommend attending a match. At the very least, take a tour of the stadium and visit the Boca Jrs. museum. Then attend any other match that will fit into your schedule. You won’t regret it!

1. A is for Amazing Argentinean Eats 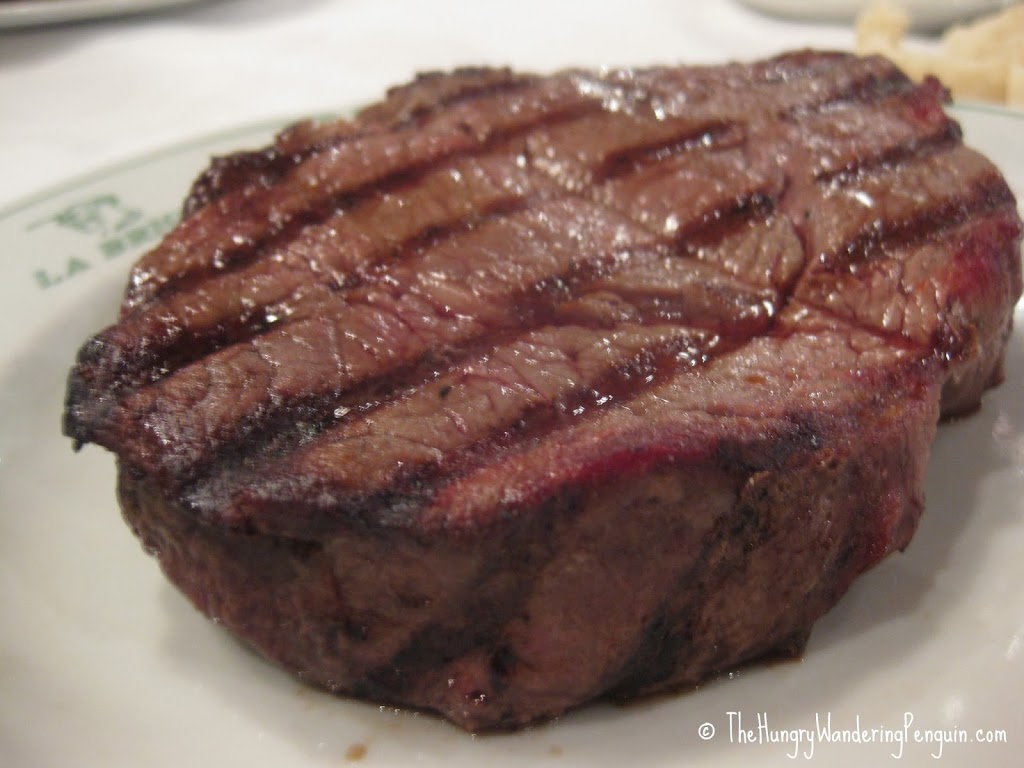 Well known for their tender and flavorful meats from grass-fed animals, Argentina is highly influenced by Europe. This is particularly true of the Italian influence as evidenced by the delicious Gelato-like ice cream as well as the pizza and pastas. I could go on and on about the drool-worthy food in Argentina, but I’ll save that for a future post. For now, I’d like to highlight the Argentinean closed-door restaurants. These “restaurants” are run by chefs in undisclosed locations, sometimes in their private homes. Though they initially began as underground eateries (think speakeasy) and were only known to others through word of mouth, they’ve become a bigger sensation. Now you can email or call the chefs to make reservations at which time they will provide you with the address for your evening in the secret (though not as much of a secret anymore) location! Anyone visiting Argentina should definitely experience this at least once!
ArgentinaBoca JrsBomboneraBuenos AiresCafe TortoniCarlos GardelClosed-Door RestaurantEl CaminitoEvitaFutbolRecoletaSan TelmoTangoTeatro Colon

The Argentina Edition: Iguazu Falls in a Day!

My Ayahuasca Journey – Surrendering to the plant medicine

The Argentina Edition: We Are Tango